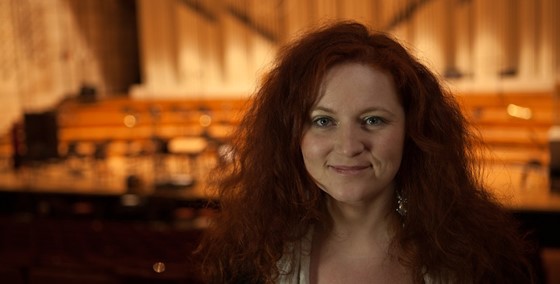 Martina was considerably younger than her fellow students when she got accepted at the distinguished University of Music and Performing Arts in Munich studying classical composition. She continued her studies of film scoring and sound design there as well as at the Film Academy of Baden-Württemberg. Thanks to her distinctive aesthetic approach, her expressive and unique voice as a composer receives world wide attention. She received numerous commissions to write music for highly awarded European projects in cinema, television, theatre and radio plays. With her husband: percussionist, sound artist and music producer Wolfgang Lohmeier, Martina has released several albums and brings her work to the stage, performing with her various ensembles all over Europe. Triggered by her symphonic score to Fritz Böhm´s graduate film MOONMAN (2006), Martina´s orchestral work has become a popular repertoire in European classical concert halls. The live-action fantasy about the man in the moon´s voyage to earth won numerous awards worldwide. In 2007, two films with her music were nominated at the Academy of Motion Picture Arts and Science´s 34th Annual Student Academy Award: MILAN and NEVERMORE („Nimmermeer“). The latter was then decorated with the Honorary Foreign Film Award 2007. With more movies such as MY BEAUTIFUL COUNTRY, SLEEPING BEAUTY or FASHION VICTIMS she is highly recognized for her wide range of musical emotion. Martina Eisenreich was awarded with the German Record Critics' Award, Leaderboard 2014 and the Art & Culture Award at her home district of Erding, Germany. For her music to BE MY BABY, she received the Rolf-Hans Müller Preis for Best German Television Film Score 2013 an 2014 - the highest value award for film music in Germany. A close collaboration with German film and opera director Axel Ranisch has started. For his prime time movie TATORT (2018), Germany´s most popular TV-Series, Martina wrote the WALDLUST Symphony, commissioned by SWR (Südwestrundfunk). Since 2016, Martina has devoted herself increasingly to conducting, mentored by David Newman, Angel Velez and Conrad Pope in Los Angeles. In June 2017, she conducted the world premiere of her orchestral work "SONG OF THE WIND" alongside Maestri Conrad Pope and Angel Velez at Rousse State Opera. Besides teaching Film Scoring and Sound Design at HFF, University of Television and Film in Munich, Martina serves on board of DEFKOM (German Film Composers Union) and is member of DKV (German Composers Association) and AWFC (Alliance For Woman Film Composers, Los Angeles). Martina is working as a composer for European and American movies as well as for the concert hall.